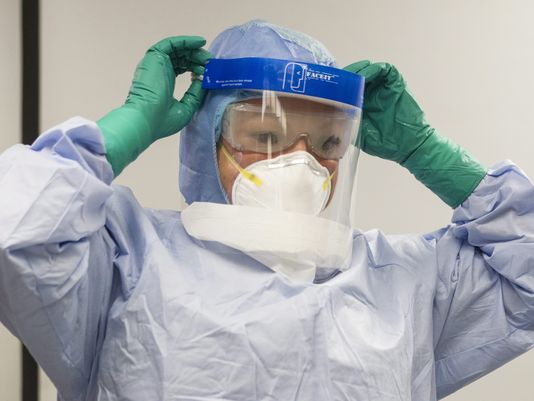 Hospital workers treating Ebola patients should wear double sets of gloves, disposable hoods with full face shields and special masks, according to strengthened guidelines issued Monday night by the Centers for Disease Control and Prevention.The guidelines focus on personal protective equipment, or PPE, giving hospitals and clinics more specific instructions about gloves, gowns and face masks, and how they should be put on and taken off.Nurses and other medical professionals have expressed concern that they are unprepared and unprotected when treating patients suspected of having Ebola.

Nurses have complained that they were sent into the room of Ebola patient Thomas Eric Duncan, the first Ebola patient diagnosed in the USA, with the skin of their necks exposed. Two nurses who treated Duncan at Texas Health Presbyterian Hospital Dallas became infected with the virus and are now hospitalized.Infectious disease expert Michael Osterholm praised the agency for issuing step-by-step instructions that are clear and comprehensive. He said the CDC listened to experts in occupational safety as well as medical workers on the job.

“These are a major step forward in protecting workers from Ebola virus infection,” said Osterholm, director of the Center for Infectious Disease Research and Policy at the University of Minnesota.”But these recommendations just by themselves do not make for a safer work environment,” Osterholm said. “Training is critical. We need to train people how to use PPE safely and effectively.”The CDC guidelines are similar to those used by Doctors Without Borders, which is highly respected worldwide for its policies for treating Ebola patients.

The group, which has been fighting Ebola since March and has 3,000 workers in the West African countries of Sierra Leone, Guinea and Liberia, has a better track record than many others. Twenty-one of its staff have become infected with Ebola, but few of those infections were in a hospital, spokesman Tim Shenk says. Most infections among Doctors Without Borders staff have occurred after local workers went home to their communities.Following the model of Doctors Without Borders, the CDC now says that all health workers should be supervised by a trained monitor who watches each one put the PPE on and take it off.

Thomas Frieden, director of the CDC, said all health workers also should undergo “rigorous training” and practice in putting on and taking off PPE in a systematic way that reduces their risk of infection. There should be no exposed skin, Frieden said.Frieden noted that staff treating Ebola patients at Atlanta’s Emory University Hospital, Nebraska Medical Center in Omaha and the National Institutes of Health have followed the procedures he outlined Monday. No one at those facilities has been infected.The new guidelines differ from guidance issued in August. In addition to other standard hospital protection garments, such as gloves, health workers should wear coveralls and single-use, disposable hoods with full face shields.The CDC no longer recommends that workers wear goggles, which may not completely cover the skin. Goggles also aren’t disposable and they can fog up, making it tempting for hospital stiff to adjust them using gloved hands that are contaminated with bodily fluids. 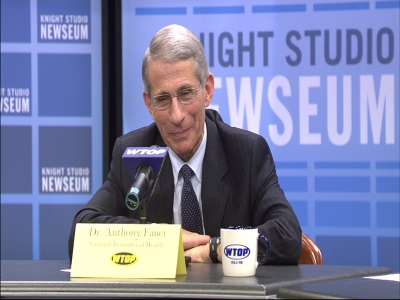 But health workers should wear double gloves, waterproof boot covers that go up to the mid-calf, a single-use gown that extends down to mid-calf and a respirator such as an N95 respirator or a powered air-purifying respirator. Workers treating patients with vomiting or diarrhea should also wear waterproof aprons.Hospitals should have designated areas for putting on and taking off the protective garments. Hospitals also should disinfect garments and gloves with disinfectant wipes.The guidelines instruct hospitals to screen patients promptly, limit the number of staffers in isolation rooms and clean the environment carefully.

If a hospital decides to test a patient for Ebola, the staff should “activate the hospital preparedness plan,” isolate the patient and make sure that staff have no further contact with the patient without appropriate PPE.The CDC has received 400 calls from hospitals concerned about possible Ebola cases, but only 10% of these cases warranted testing and only one test was positive for the virus, Frieden said.While every hospital should be prepared to diagnose Ebola patients and isolate them, Osterholm said, those patients should then be transferred to regional centers that will specialize in Ebola care and get additional training.

This system would be similar to that currently used to centralize trauma care or burn care.Four hospitals in the USA have specialized biocontainment units designed to treat the most dangerous infectious diseases: the National Institutes of Health in Maryland, the Nebraska Medical Center in Omaha, Emory University Hospital in Atlanta and St. Patrick Hospital in Missoula, Mont.”The guidelines are fine and welcomed, but the truth is the guidelines are not the problem,” said Peter Hotez, dean of the National School of Tropical Medicine in Houston and a professor at the Baylor College of Medicine. “Unless a hospital is going to specialize in biocontainment and rehearse and practice frequently and regularly, the hospital should not be asked to manage advanced Ebola patients with high viral loads. Unless we have many Ebola patients, these should all be referred to specialized facilities.”